Borehamwood Chess club are again fielding 2 teams this season: First team plays in Division 2 of the Hertfordshire league for the first time; Second team plays in the Herts and District League. Last night’s match got off to a good start with Kevin Sear winning against his opponents Polish Opening. Malcolm Gesthuysen handled a Ruy Lopez Schliemann Defense well and got a comfortable draw. Anthony Kent walked into an opening trap and lost the exchange early on. Fighting back to a Bishop and 2 pawns for a Rook, black’s bishop pair were strong. White spurned a draw offer, overstretched, and payed the price. On board 4, Terry draw with Wali on a very locked position that neither side could progress. Board 5 was hard fought, but in the end black could not recover from being 2 pawns down.

We managed to beat Bishops Stortford 3.5 – 1.5 at home last week. This week, we drove up the M11 for the return match, and managed to win again by the same margin. Also means we have won Division 3 of the Herts League!


Dan Defeated Kevin White on Board 1 with a strong attack in the Londom System. An excellent result.  Anthony won a reversed scicilan in an open tactical game, his opponent running out of time in lost position. Kevin obtained a solid draw in even position. Terry mated his opponent. Malcolm unfortunately played the moved he should have played next (O-O) first, and prompltly lost a piece. Nobody can catch us now in the league – we are champions with 2 matches to go.

First – apologies to our legion of fans for not posting for a while. Too busy playing chess. This win gives us 7 wins, a draw and a defeat from 9 matches so far this season. We outgraded Bishops Stortford on all boards, but it wasn’t all plain sailing. Anthony’s opponent played a dubious line of the Pirc Defence which was duly exploited. Dan castled queenside to attack opponents king-side , but lost to a strong attack on f7 which gave his opponent the exchange and control of the 7th rank, leading to a forced mate. His first defeat of this season. Adam won convicingly with the French, and Jonathan also expoited material advantage. Malcolm’s game went to the wire on time until a draw was agreed in a rook and pawn ending. The return away match is next week

Having beaten Royston a few weeks ago at home, this trek up the A1 was always going to be tougher without our top 2 graded squad players. The weather was benign, and we arrived in good time. On paper, the teams looked very even.

First, Anthony drew after a an exchange of pieces in the Sicilian. Then Malcolm’s opponent played the Slav, and surprisingly castled queen-side. He then lost a piece when his queen could no longer cover it after a tactic.
Dan had a nice win  – see below. After he played 18 Bxg6, black replied Nxd, then 19. cxN BxRh8 follwed by the excellent 20. Be8!, with white threatening mate from N on g5 and the queen. Material was won, and white soon finished the job. Terry’s pieces where too busy defending and his position was breached. Kevin’s opponent was very short of time, living on the 10 second increments.  A draw was agreed in a queen and rooks ending which was the a fair result. So we squeezed a 2-3 victory.

Dan, above, contemplating his next move

Kevin and Terry in deep thought

Have a great Christmas and New year. Back for more in 2019!

Last year we were caught in some nasty roadworks, so this year google maps was duly consulted. We were stronger on paper, and so it proved over the board

Adam won playing the Nimzowitch Larsen. Anthony’s opponet played an aggressive line against the Dutch which was eventually repelled.  Malcolm won comfortably.  Jonathan had extra pawns in a Queen and rook ending, but his king was out in the open and his position became lost. Dan’s game was adjourned with a clearly winning pawn endgame, and his opponent resigned a few days later.

Three league matches in October, and three wins. No complaints.


Not as straightforward as the score might suggest, but not quite a pre-halloween fright night either. Nick Wooster got a very creditable draw against Adam. Malcolm built up a strong attack on Simon Morris’s black king, forcing him to give up his queen for a knight and rook. Dan’s game was very open but he held his nerve. Terry got his knight pinned to his king, creating too much weakness. Anthony got a decent Sicilian defence as black, but then went a bit astray reaching the first diagram below after 22…gxf. White should have played something like 23. Qh4 with advantage, but instead played 23. f4,  allowing 23….e4 in reply, blunting the white bishops. White then allowed the Black queen to get to d4 (Andrew Du Boulay was getting short of time) and the a pawn was heading all the way to be queened (2nd diagram after 37…a2). 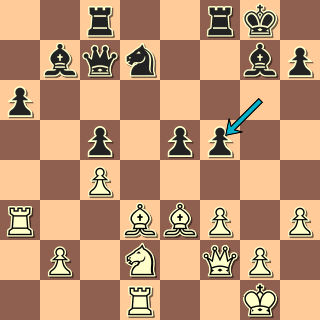 2 more Herts League matches We have a match against Watford in November, then the return against Royston in December.

Our first home Herts League match of the season, and a comfortable win against Royston 2, who traveled 35 miles from the far corner of Hertfordshire/Cambridgeshire border. 2 wins out of 2 so far in the Herts League.

Away team white on odds.


Jonathan Rubeck played his first match for the club, and won against a feisty Petroff Defence. On Board 1, Adam’s game was a complicated French Winawer, where white took the Poisoned Pawn and paid the price. Dan’s closed Sicilian got complicated, but his King Side attack eventually prevailed.  Draws for Anthony and Malcolm completed the picture.

Board 1 below: White’s King is somewhat exposed 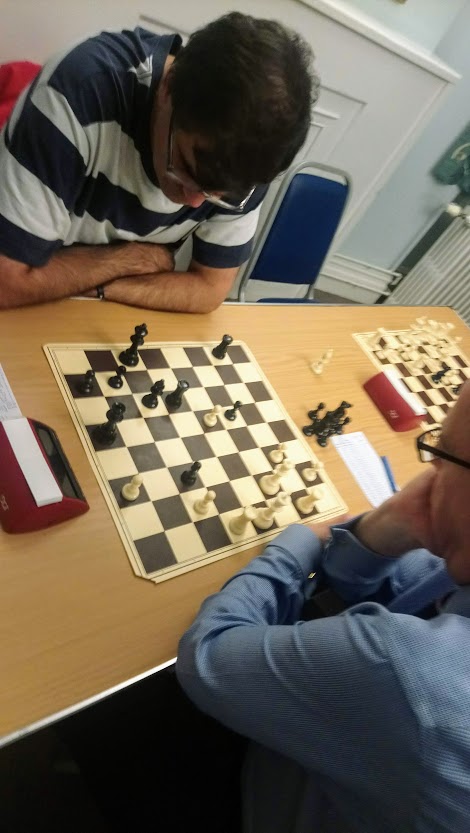 Board 3: White’s King getting slowly squeezed.

Borehamwood put on a good team performance on returning to the Herts and District league. A team was entered this season to ensure all club members (graded under 160) get a reasonable number of games.

Dan Marcos faced a Closed Sicilian, where white attacked too early and then grabbed a pawn which lost the exchange. Kevin Sear was under pressure against the Black Lion, which gave his opponent a strong initiative. Kevin succeeded in swapping down to an opposite colour bishops ending, and a draw was agreed. On his debut for the club, Matthew won the exchange but then gave it back (and more), and was probably fortunate his opponent offered a draw. Terry’s opponent over-pressed in a very even position, which cost him a couple of King side pawns and a lost endgame. Malcolm was last to finish, seeing home his extra pawn in a won endgame. Back to move below cannot hold up whites attack. 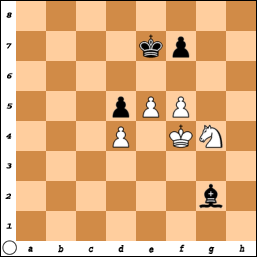 Borehamwood have not made the short trip to Potters Bar to play Little Heath for a number of years. The teams were evenly matched, so to come away with no defeats on all boards is very encouraging.

Adam played a sort of Zukertort and picked up a good win on top board (Picture 2 below). Dan played a highly combative line against the London System, giving 2 exposed kings and lots of traps, but somehow he managed to  draw (picture 1). The position below shows white’s Queen on b7 while Dan’s Queen was under attack.  The Caro-Kan and Queens gambit declined were also drawn on boards 4 and 5 for Malcolm and Terry. Anthony got some good pressure in the Sicilian Grand Prix Attack and secured a pawn advantage with black failing to castle. A won pawn ending eventually emerged, giving us the points.

The M25 exit was closed on the way home (same happened at last match in Bishops Stortford). No idea what we did to upset the chess gods, or maybe we should look up road work schedules before the next match.

Our chess event, which was part of the Elstree and Borehamwood Town Council Civic week, was a success. Delighted that the Town Mayor,  Victor Eni, and his wife, Justine, were able to open proceedings for us. We had a 10 minute rapidplay mini-tournament, and it was particularly pleasing to see some new faces.

We are now closed for the summer, returning in September/October for the new season.